"When I left J. Crew I thought I was getting a lot of calls and I didn't. I was afraid I would never go back to work – I just answered every call I got and put on Many different things end up. It all has to do with what I was doing before, but the things I would really be concerned about like clothes being seasonal and expiring after a certain date and on sale I don't worry anymore, this part is so great.

CAREER
My first project [after J. Crew] was this hotel in the Bahamas – it was a foundation structure and I monitored the appearance of everything. It's funny because a lot of people think this type of design is so different from my previous life, but I ended up overseeing the looks of all the J. Crew, Madewell and Factory stores. After the hotel, I took a call from someone who said, "Hey, do you want to watch TV?" I definitely didn't, but we were talking and before I knew it I was on a reality show. It's going to be on HBO Max in late November, and this whole thing is about transformations – some of them are fashion and beauty, others are home. My ethos is so similar whether I'm putting together outfits or decor. Clothing is often a mix of materials. When I wear flannel pants, I mix them with a crisper shirt and maybe a touch of something sparkling. It's similar at home. If you have a soft, fluffy rug, what is running on it might be a little crispier. Maybe you have a moment brass.

Separate from all of this was Loveseen. It started because I'm obsessed with teeth, skin, and hair – I have a genetic disorder that affects all three of these things, so I notice it in other people. I was on the Oprah Winfrey Show years ago and before I went out Oprah came backstage to say hello. I have no eyebrows or eyelashes, and next to her I felt like a wet rag. After she left, my makeup artist Troi Ollivierre put extensions and eyelashes on me. It worked for the show, but I couldn't really wear the lashes that were on the market. They were quite large and dramatic and are meant to sit on top of your real eyelashes. I really don't have anything to sit on, and I don't have that natural dark lash line that kind of camouflages them. Troi and I created these lashes that can work for me and also when you have natural lashes. If you just want to wear a bare face and red lip, Loveseen eyelashes are for you. The most dramatic thing we do is get a longer cat's eye, or maybe a playful blue – you don't need an entire face with bold makeup to make them look right.

FORM
I don't like wearing a lot of makeup because I get older and as you get more wrinkles, the makeup will settle in the crevices. It can look hard. Now I stay away from anything that is chalky, dry, or powdery so I had to change a lot of what I used. I really like this Blur Stick from Milk, but my favorite makeup product is the Dior Airflash stuff. You should spray it on a sponge, but I'll spray it right on my face. My lungs are probably covered in Neutral 2, but I don't care – I can walk out the door in two seconds. The other thing that changes life is microblading. I wear glasses that hide my lack of brows a bit, but I look a bit like a burn patient especially by the pool or on the beach. It's amazing how hair structures the face. Audrey Glass is the best microblader ever. It is one thing to be able to fill in an arch or make more of it, but another thing to give someone who has nothing to an actual forehead shape. She figured out what would look natural on my face and it went with it, my eyes being a little uneven instead of trying to correct too much. The microblading takes about six months, and when it fades it becomes just a shade.

Eyelashes, a red lip and no eyeshadow really work on me. I used to get so close to my eye with eyeshadow that it actually made my eyes look smaller. Especially with the glasses. When wearing eyeshadow, one of the tricks I've learned is that my eyes look bigger when I put it higher on my lid, like over the crease. Most of the time I do this thing called tightlining on my upper lids. I've worn the lashes a lot, especially the Levi and Jack in brown, so I know what tightlining is now. The eyeliner I love is this Tom Ford that has two different endings – I find it to be clean, it stays and is very easy for me to control. My favorite red lip is Red Square by Nars. An oldie, but a goodie, and the texture just works for me. Another lip thing that I love is that Cle Melting Powder. I use one that looks brown and then a bit of the pink on top. Some lip products make my lips so dry they start burning, and these don't. I have a hard time with it.

I don't wear highlighters – but I buy a lot of them. There's a spotlight from Absolute New York that is very similar to the Cover Fx, but with better colors. The one that is so beautiful for everyone is called the Bronze Rose. I use this in the inner corner of my eye. Flesh Beauty has one in a pot that I love, there's also one from Sai, one from Ilia … I love them all. My other favorite things are these Kaja Bento boxes. I'm a believer in Cloud Paint and I have any color but the process of pounding my cheeks with these heart stamps is so much fun. They're something a 12 year old would own, but I fucking love them. 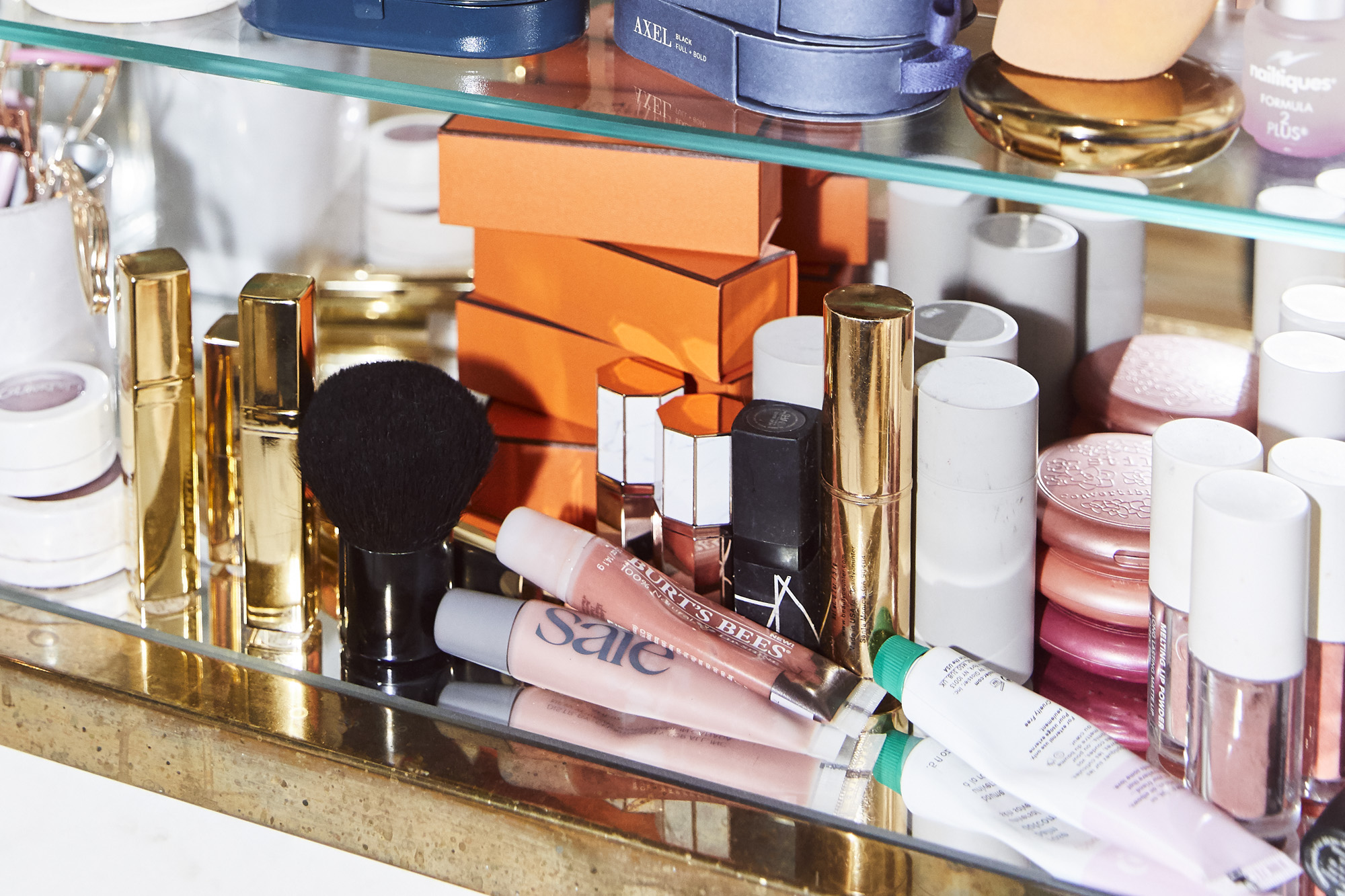 SKIN CARE
The two things I mentioned in my last Top Shelf that I still use are this Arcona Brightening Gommage and P50. But my new favorite thing is the Masque Vernix from Biologique Recherche. I had a facial from Joanna Czech that changed my life and she ended up putting this stuff on. That night I had to go to an event and when Troi was doing my makeup he noticed that my skin looked plump, which is not plump at my age. Or the parts that are bulging are not the parts that I want to be bulging. Pooh. Additionally, my skin soaked in makeup pretty easily, and this stuff made the makeup stick around. It also kind of helped fill the lines without caking up. It's so expensive but I'll never talk anything out if it doesn't really work and this shit is insane. My only complaint is that it kind of smells like all Biologique products.

My hardcore skincare really is a tool. I use one of those spiky dermarollers … shouldn't I? It's a bit masochistic like exercising, but I don't know if it actually works. I love these freezer bars too. Romy Soleimani did my makeup for the SAG Awards when I was in LA and she used this on me. They look like a sex toy – so much so that when my son saw them he said, "Mom, what are you doing?" But they don't make me look dead.

HAIR
I have really thin hair that tends to get frizzy and I've tried so many different things. When I use the Ouai Shampoo and Le Labo Conditioner and go to bed wet, it looks perfect when I wake up. The shampoo makes my hair pretty soft, I love the smell of the conditioner and that it is so thick, and I haven't found any other combination that actually helps with my frizz. I can't wash my hair that often because it's thin, but also because my grays are so dry. 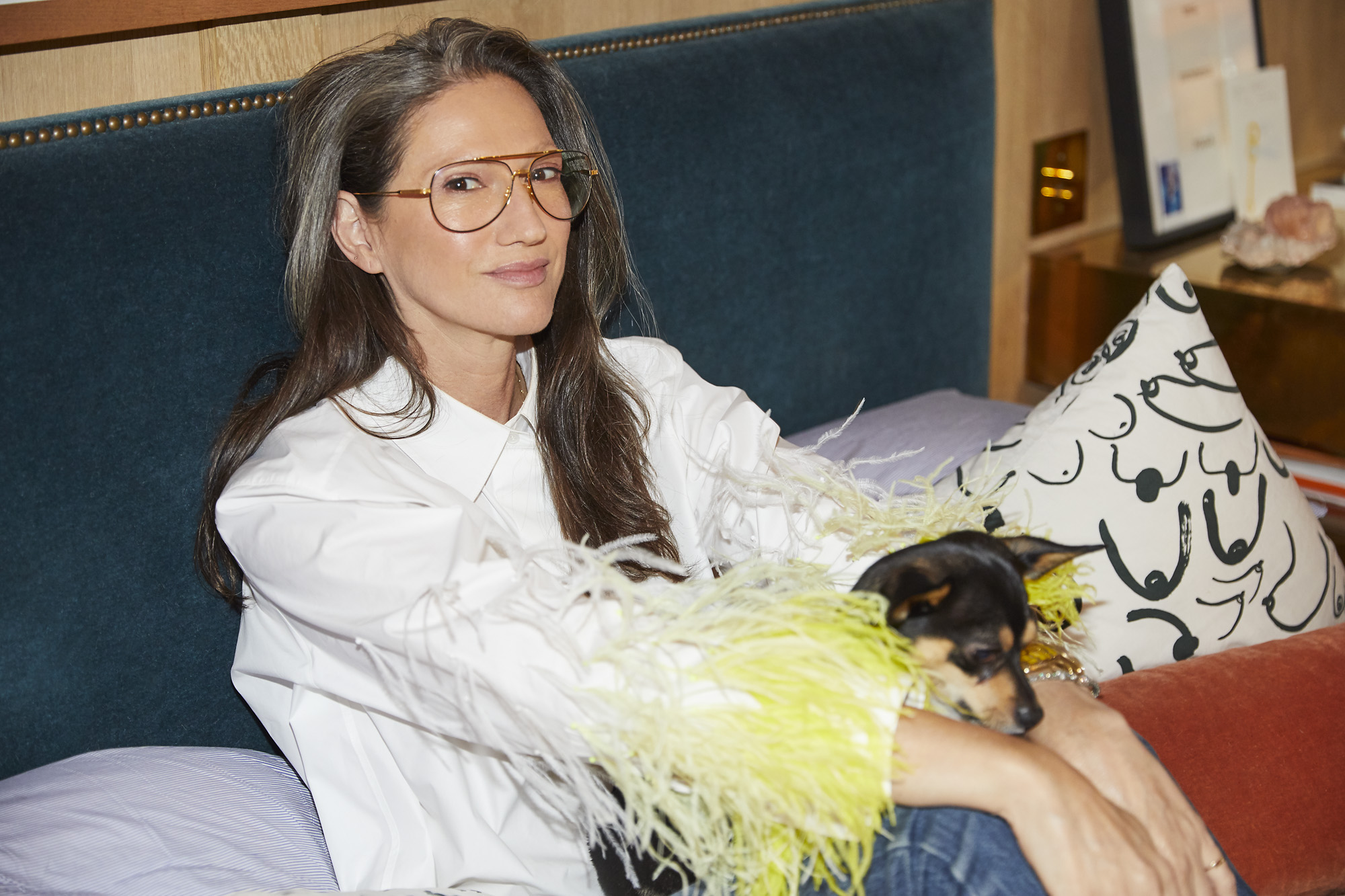 The gray came in as a strip at the beginning and I said, “Yes! Cool! “And then the rest of my hair started going gray and it wasn't that cool. I got gloss to cover it up – I'd sit in the chair a full Saturday, spend $ 400, and the color would go away three days later. Once my colorist used this stuff to help the hair take on color. On the day of that appointment, a friend flown in from California to visit me and I had to leave her my only key ring. When I got home from the parlor, she was supposed to let me in. I got there, rang the doorbell, and my friend came to the door, looked at me, made that strange face and walked away. I rang the doorbell again and she didn't come back. I called her and said, "What the hell?" She didn't recognize me – she thought I was a woman who was handing out leaflets with a wig on because my hair looked like a fucking wig because it had taken so much color I had no ripple of color! That was the end of my horror.

NAILS + BODY + SCENT
My nails are either bright orange-red or nothing. I am really religious. I've tried many red wines and keep coming back to Russian roulette. Otherwise it's a buff. I can strengthen myself, but Glamsquad has just reopened and I just have to say thank god. My toes were out of order – I can barely touch my toes, let alone paint.

Coffee in general is my favorite thing in life. I love coffee, I love coffee ice cream and I love this Le Labo coffee scrub. I give it as a gift to many people. I also used baby oil in the shower, but I almost broke my neck once because it was getting so slippery. Now I am using this Wonder Valley oil. The shower doesn't get completely greasy which I love and the smell is great. Somebody got me the first one, but I just ordered a whole case of it.

I know this is going to sound strange, but when I was working at J. Crew I clearly remember people saying, "I know you're in the office because I can smell you from the elevator," and were there a bit of presence, which I liked very much. I felt like I had to own this big room. Now I wear less perfume because I'm trying to be a little more reserved. I still use Creed Silver Mountain Water, which has always been my scent. If I don't wear it my son will ask me to put it on – he's older now, but if he went to camp I would spray his pillowcases and blanket with it. Smell can be very soothing, so I wear it every day. "

10 Issues That Affect How Quick or Gradual you Lose Weight